A week into his new job, Secretary of State Antony Blinken spoke with family members of hostages or those wrongfully detained abroad and told them that their loved ones “are a top priority in our diplomatic engagements with both allies and adversaries.”

Such a meeting in these early days is an acknowledgement that the Biden administration does not want its foreign policy goals to overshadow the plight of detained Americans, and does not plan to repeat the missteps of the Obama administration. However, it is not yet clear what immediate action the new administration will take to secure the release of dozens of Americans held overseas.

Hostage policy became a flashpoint for the Obama administration after the brutal 2014 on-camera beheadings by ISIS of Americans, including journalist James Foley. A failed U.S. rescue attempt and the executions of Foley and three other Americans were then used by the terrorists as propaganda, compounding criticism of the administration’s policy toward Americans captured or detained abroad.

Diane Foley, the mother of James Foley, was invited to Tuesday’s video call with Blinken.

“I was very encouraged by Secretary Blinken taking 90 minutes of his time to express his support,” Foley told CBS News. “He was sincere, compassionate and very patient in answering the varied questions.”

Foley said Blinken promised to be as transparent as possible with the families of American hostages, a quality she said was missing in 2014 during  the Obama administration.

In 2015, President Obama ordered a sweeping overhaul of U.S. hostage policy, citing families like the Foleys who told him they had felt “lost in the bureaucracy” and overwhelmed by “confusion and conflicting information about what the government [was] prepared to do to help.”

One change Mr. Obama instituted was designating a senior diplomat to be the Special Presidential Envoy for Hostage Affairs. The current envoy, Roger Carstens — a Trump appointee — has been asked to stay on to maintain continuity on the cases and for the families.

In his time in office, President Trump made the return of U.S. hostages a high-profile priority, often touting the work his people were doing to bring Americans home. But the families of those still in custody say they feel left behind.

Veronica Vadell Weggeman’s father, Tomeu Vadell, has been held prisoner in Venezuela for four years. She said the call with Blinken was a “breath of fresh air,” but added that it was also sobering to see the dozens of other families who still have loved ones being held abroad.

“I at least appreciate having that phone call so soon into this new administration,” she told CBS News. “It shows you that they’re interested. It seems we are a priority to them — at least that’s what was portrayed.”

Tomeu Vadell is one of the CITGO 6, a group of American oil executives who were lured to Venezuela for a business meeting and then imprisoned. He has underlying health conditions and, at 61, is the oldest of the group, making him especially susceptible to serious complications, should he contract COVID-19 or another illness in prison. Vadell Weggeman also just gave birth to her father’s first grandchild — a son whom she named in his honor.

“He’s only ever met him over the phone,” she said.

Blinken said in a statement that the State Department is committed to the full implementation of the new Robert Levinson Act. It contains new legal provisions, like allowing the U.S. to sanction those responsible for illegally imprisoning Americans.

The U.S. government and the family of retired FBI agent Robert Levinson, who disappeared in Iran over a decade ago, concluded in March that he had died in Iranian custody. Levinson, a retired FBI agent, disappeared in 2007 while meeting a source in the Iranian island of Kish. Following years of uncertainty regarding his status, Trump administration National Security Adviser Robert O’Brien officially informed the family in 2020 that Levinson had likely died “some time ago”.

Detained Americans can complicate U.S. diplomatic negotiations on other issues, and Iran is one country that has been accused of taking Americans hostage to gain leverage. At least four Americans of dual citizenship are imprisoned in Iran, including American-Iranian businessman Emad Shargi, who was most recently convicted on fabricated charges of espionage a few weeks after Mr. Biden’s election. He has been held in an unknown location and out of communication since last December, according to his legal representative.

The Biden administration hasn’t explained yet how it plans to handle the Americans held in Iran.

In 2016, the Obama administration negotiated a high-profile multiple prisoner swap with Iran that freed four Americans, including Washington Post journalist Jason Rezaian. At the same time, tens of billions of dollars in long-frozen Iranian assets also happened to be released by the U.S. through a decades-long Hague Tribunal settlement — which led to allegations by Mr. Trump and other Republicans that the Obama administration had paid a high ransom for the hostages.

Brett McGurk, a presidential envoy for the Obama administration, is the official who brokered the swap. In 2019, McGurk described the negotiation to CBS’ “Face the Nation” as totally separate from the nuclear deal and the Hague settlement, but acknowledged that “all of the issues came to a head at the same time.”

He said Iranian hardliners played games with the prisoner release up to the last moment. The cash transfer ultimately acted as leverage the U.S. held over the Iranians to make clear to them that everything would fall apart unless all of the prisoners, including Jason Rezaian and his wife, were released.

“At the end, when the Iranians tried to renege on returning Jason, returning his wife, I made very clear that nothing should go through on anything until all the Americans were on a plane,” McGurk said.

In fact, American businessman Siamak Namazi was left behind at Evin prison. Then-Secretary of State John Kerry said that he personally took up the issue with Iran’s Foreign Minister. However, Namazi remains imprisoned to this day, and his elderly father Baquer has also since been detained.

McGurk is now part of the Biden administration and will lead the Mideast and North Africa team on Mr. Biden’s national security council staff. It is not clear what future role he’ll play in talks with Iran, but he is one of the only Americans to have directly negotiated with the hardline elements of the Iranian regime.

“I was very encouraged by Secretary Blinken’s outreach to families of U.S. hostages, including mine, so early into his tenure,” said Babak Namazi, son of Baquer and brother to Siamak, who was also on Tuesday’s call.

“I have renewed hope for the release of my family and hold the secretary to this commitment,” he told CBS News.

“I would remind Secretary Blinken that my 84-year-old father Baquer Namazi is in extremely frail health and needs to leave Iran before an irreversible tragedy occurs,” Babak said. “My brother Siamak Namazi is now the longest held dual American-Iranian citizen, being held hostage by Iran since 2015.”

There is also concern that the Biden administration won’t make the release of U.S. hostages a precondition for reentering nuclear talks with Iran. Asked by Senator James Risch at his confirmation hearing whether American hostages should be a prerequisite of any negotiations with Iran, Blinken skirted the question.

“Very high up in the hierarchy of things I need to be responsible for is: doing everything we possibly can to bring any American home who is being unjustly detained anywhere in the world, or is a hostage, including in Iran,” Blinken responded. “That has to be a priority.”

Asked again by NBC News this week if the release of Americans imprisoned in Iran should be a condition for the U.S. to enter into any new nuclear deal, Blinken said, “Irrespective of any deal, those Americans need to be released. Period.”

“We’re going to focus on making sure that they come home one way or another,” he said. “We’re also going to focus, same time, depending on what Iran does, on working on the nuclear matter.”

Any doubts about Iran’s motivations in detaining foreigners should be dispelled by former Iran hostage Xiyue Wang, who was released in a prisoner swap in December 2019. He said he was told outright by a top Iranian official that the regime has made an industry of hostage taking. 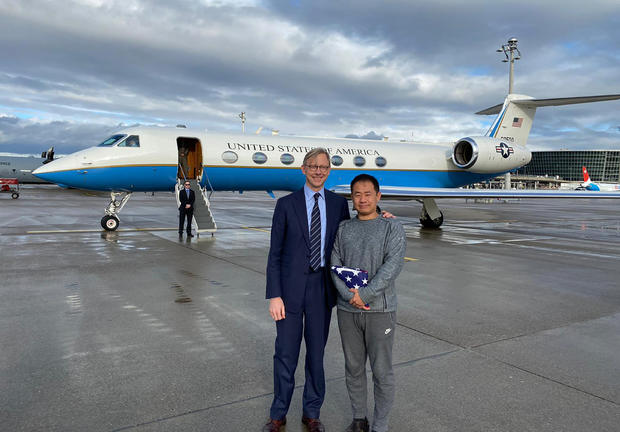 “(Iran’s) Ministry of Intelligence interrogator told me clearly that they need me as a spy to convict me so that they can do a deal with the United States — you’re not the first American and you can be assured that you’re not the last American to be in Iranian jail,” Wang told CBS News in his first TV interview since his release.

Wang has therefore called on Mr. Biden to make the release of Americans a precondition. “Without their return, no deal with Iran,” he said.

Fatalities reported as Myanmar police intensify use of force